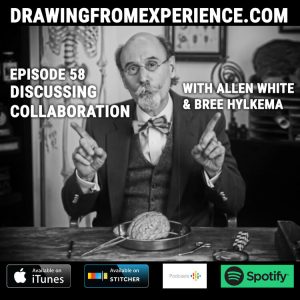 Bree and Allen recently appeared on the Drawing From Experience podcast, artist Shane Izykowski’s show in which he interviews artists and examines the creative process. In our wide-ranging conversation, we discussed the art of collaboration, and went into the history of Obsolete Pictures and the genesis of the Capitol Theater museum exhibit. Click the image to listen to it online, or download it from any of your regular podcast sources!

More About The Picnic
This film is a silent melodrama, done in the style and length of old two-reel dramas and comedies. A reel of film was between 11 and 15 minutes, depending on the speed at which it was projected, hence a “two-reeler” was anywhere from 15 to 24 minutes long. Silent films were typically projected near the speed which they were shot, which was 16 to 18 frames-per-second (fps), a variable number because they were often recorded with hand-cranked cameras, and perfect timing wasn’t yet technologically possible. Later, the camera and projection speed of sound films was standardized at 24 fps, as otherwise correct audio playback would have been impossible. But to post-silent-era audiences, silent films often appeared speeded up, as films that had been shot at 16 to 18 fps were now being projected, on modern sound-enabled projectors, at the 24 fps standardized speed used for sound film; thus a silent film shot at 18 fps would be incorrectly shown at 24fps, or 133% of its correct speed. The Picnic deliberately simulates this slightly higher speed. Correct projection speed is no longer much of a issue, as modern film restoration has made sure that such movies are generally shown at the proper frame rate. The film’s rollicking and textured music was created by talented composer Dan Cantrell. Although he had created music for quite a few films before this one, he truly honed his style by composing for the outrageously comical pirate cartoon The Marvelous Misadventures of Flapjack, shown on Cartoon Network. Cartoon scores are directly descended from silent film scores, as such music was often not merely used for mood or atmosphere but was also a form of foley (sound effects), which were performed by the musicians and incorporated into the score itself. Dan makes perfect use of his varied instrumentation to weave foley into the film’s score, and it adds to and enhances the story’s physicality and sight gags. The movie wouldn’t be the same without it!

More About Kokolores
This movie is inspired by German Expressionist and European Surrealist films and performances of the 1920s and 30s. In addition to taking inspiration from the usual Expressionist suspects such as Das Cabinet des Dr. Caligari, another essential touchstone for this film was the legendary avant-garde dance piece Triadishes Ballett, premiered in 1922 by the Bauhaus-affiliated artist Oskar Schlemmer, with music by composer Paul Hindemith. Expressionism was a movement that sought to externalize otherwise internal states of mind and emotion. The distorted set design of Caligari, for example, is deliberately meant to evoke madness, as its unsettling tale is told by the inmate of a lunatic asylum.

The film’s German title, Kokolores, means “nonsense” or “balderdash,” and reflects its whimsical approach to the film’s dances, costumes, and set design. There is, of course, method to its madness, as each character has a geometric theme that corresponds to their movements, and along with the score, the film seeks to creates an experience based in tone, shape, and space.

THE BEAST FROM THE DEEP

More About BEYOND BELIEF
The obvious progenitor of these films isn’t an earlier movie, but instead Robert Ripley’s popular long-running comic strip series, Believe It or Not!, which debuted in 1919. At this time in history, before the Second World War, the public’s unflagging interest with freaks and oddities collided with growing scientific literacy to produce this hybrid genre, which might be labeled “docutainment,” that aimed for scientific pretense while actually being pure popcorn (and is currently the entire business model of the History Channel). The dark side of this endeavor was, of course, the misapplication of Charles Darwin’s theories to promote eugenics, and which sought to utilize evolution as some kind of a contest with winners and losers.

Siamese Twins, Etta & Emma is in part inspired by the fact that our Obsolete Pictures Producer, Bree Hylkema, who also stars as Emma, is an actual descendant of the original “Siamese Twins,” Chang and Eng Bunker. This film in particular is an homage to her unique and celebrated ancestor.

The Beast from the Deep posits that the San Francisco Bay has its own version of the Loch Ness Monster. Although it would have been fun to have our creature swim beneath the Golden Gate Bridge, that structure didn’t exist until 1937.

The Floating Girl is purest whimsy, and although it looks simple, it took quite a bit of effort to pull off. Like much of our work, a combination of practical and digital effects delivered the result we sought. But rest assured our “girl” was actually up in the air!

WELCOME TO THE MOVING PICTURES

More About Welcome to the Moving Pictures
This is a 1920s-style courtesy film of a type that was quite common, even in the silent era, although at that time they were also often presented as slides. At the Library of Congress site you can view some excellent examples of silent-era courtesy slides. And the 1909 Biograph film Those Awful Hats pokes fun at the Edwardian ladies who wore enormous bonnets even when doing so might terribly inconvenience the people sitting behind them.

This type of short film run before the feature, when not a trailer for coming attractions, was called a “snipe” in the lingo of the theater biz. Certain snipes have achieved a kind of cult status, perhaps in part due to their endless repetition and long life, or in some cases simply because they’re fantastic, like the unbeatable singing snacks in the pop-culture earworm Let’s All Go to the Lobby.